It’s over a week since the Plone Conference 2007 in Naples, Italy but I’ll try to wrap up my highlights from the third and last day regardless of the lag.

At the socializing dinner on the evening of the second day I had the unexpected fortune of finding myself seated at a table next to Roberto Allende from Menttes and Plone Cono Sur. He seemed like an interesting guy, so I decided to check out his speak “Plone Cono Sur: creating a Plone users group from scratch” on the following day.

Long story short: That talk really made my day. It was both funny and highly motivating. Watch it for yourself:

So as soon as I got back to Cologne I got in touch with the local Zope and Python User Groups with the goal of contributing as much as I can. Let’s hope we’ll have A PZP (Python Zope Plone) User Group in the region soon.

Lastly I’d like to thank Luiciano Ramalho for the neat t-shirt. I’ve never “slept” with a Brazilian before. It was, uh… special. ;)

If there was a general theme to take home at the Plone Conference 2007 in Naples, Italy on the second day of the conference – beside from Plone now being officially trademarked – it has to be that “Plone is a Product” and “Plone is Democracy”.

Now everybody repeat after me… No, seriously – all together now! :)

I think “Plone is a Product” is a very important statement. It really helps to explain that “Plone is not technology” and it’s a helpful ‘tool’ to position and ‘sell’ Plone, both for the community and people new to Plone.

“Plone is Democracy” tells a powerful story with only three words. Plone is open for anyone who wishes to participate. Plone is you.

It’s now the 11th of October and the second day of the conference so I’m sort of lagging, but here are my impressions from yesterday.

The next best thing I took home with me on the first day of the Plone Conference 2007 in Naples, Italy – after meeting a lot of dear new and old faces – was attending the “Top Ten Ways to Get Involved with the Plone Community” speech by Darci Hanning (Scott Paley has an excellent writeup on his blog) and the “How to market Plone the Web2.0 way” by Christian “MrTopf” Scholz.

The Plone community is amazing. It is Plone. That said, we can be somewhat insular. A lot of the time we are preaching to the already converted. I think we are all aware of that. However, we’d all like to see Plone spreading even further and bring more converts into the fold.

What I loved about Darci’s talk was the numerous points on how people who are not software developers can get involved in the community and make great and important contributions, really driving home point that the community is not just for code centric people. I think they serve as great motivational arguments to engage and motivate more people from the “outside” to join the Plone community. 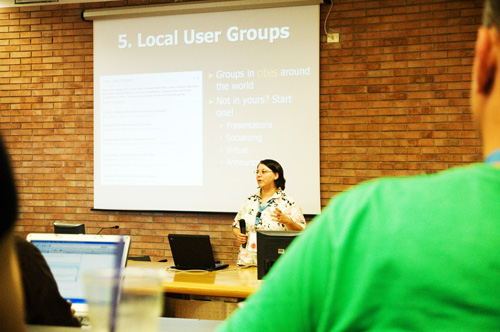 I think Christian’s points about reaching outside of the community and spreading the word of Plone using web2.0 and social media was a healthy dose of long due common sense and I hope it will inspire more members of the Plone community to network on social networks, blog, screencast and podcast more about Plone. He’s also streaming talks at the conference. 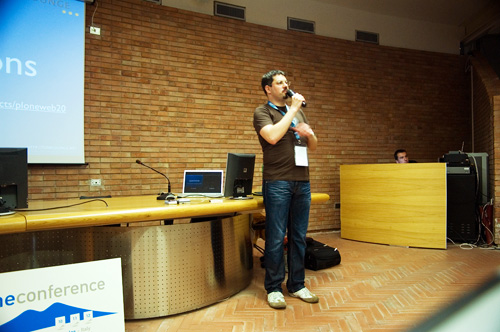 | View | Upload your own

You can find some presentations held at Plone Conf 2007 on openplans.org

More images from me will be up on flickr later . In the meantime you can see what others have already uploaded on flickr by searching for the official tag ploneconf2007.

Due to all sorts of circumstances it’s been over a month since my last post. Sorry about that. I thought I’d just tell you all that I’m on my way. See all you wonderful people there! :D