My entrepreneurial buddy Francis and I tried to crowd fund a startup. It was an iPhone app. More specifically, an Instagram for one second videos. We failed. Spectacularly.

But don’t let that discourage you from trying. Here are some of the lessons we learned.

Update: For validation of our concept, see now twitter owned Vine and Cesar Kuriyama’s 1 Second Every Day that emerged over six months later. Recap for new readers: In the summer of 2012, me and Francis decided to experiment with crowd funding. We’re both busy running a couple of other startups, but since we were both n00bs to this crowd funding thing we thought we’d better get some experience and without potentially involving our main brands.

In short, we were trying to crowdfund an app to shoot and share videos composed of one second shots – six months before Vine and One Second Everyday. (I still remember people laughing at the idea back then…)

We decided go with IndieGoGo since you needed to be a US citizen to use Kickstarter at the time – or find someone with one willing to be use as a proxy, which would raise all sorts of other issues like liability, legality and added costs in fees – and the potential of a 3rd party effectively being able to hold your money hostage if successful.

Here’s what the last iteration of the video pitch on IndieGoGo looked like:

Starting out, we had some assumptions and there were a few things we wanted to test and (in-)validate:

Read on for the more longwinded answers and conclusion.

As luck would have it, during our campaign I also got the chance to ask IndieGoGo co-founder Danae Ringelmann (@GoGoDanae) in person at a panel on Crowd Funding of startups in Europe moderated by Mike Butcher (@mikebutcher) at the Campus Party EU in Berlin. Danae was kind enough to sit down with me after the panel and give me more advice on our crowd funding campaign. Here’s what we learned from her:

BONUS (and this is from me, not from Danae): Pay or raise the plus $ 1.000 yourself with family and friends you will pay back if you can and if you’re going for a campaign that gets to keep the money regardless if you reach your goal and consider the PayPal fee marketing expenses. I’ve heard this trick is more the rule than the exception on IndieGoGo.

It’s evident to everybody by now that we were spectacularly unable to fund the development of the OneSec iPhone app. Was it because it’s the wrong product? We don’t think so based on the feedback we are still receiving. We still think there’s a great opportunity to be had here. We have not given up on it.

Could we have kept on going, extending the campaign, applying and executing on the knowledge that we gained on the way? Certainly, but we decided to call it quits and call it a #fail. We had learned a lot about doing a crowd funding campaign and it was time to move on.

In the course of the campaign we were tweeting, retweeting, blogging, mailing and Facebook posting night and day. Manually and automated. We spammed around 680+ journalists in an email blast. We posted tips to about 20 of the top tech trend agencies. We filled special interest forums. We instagrammed. We YouTubed.

And how did this convert? The honest answer; We have no direct way of measuring it as IndieGoGo doesn’t offer standard referral analytics. You can track how many tweeted and posted your campaign to Facebook using the share buttons on the campaign page – but that’s it.

Having no referrer data is insane if you’re somewhat successful and want to identify where the traffic is coming from and what to focus on. Luckily for us, we were complete failures and measuring conversion of referrers when you have zero effects is pretty easy. We still would have loved to see which source drove the most traffic – if any, though. (See Francis’ posts on stats on publishing and conversion for more on this subject).

The lesson to us was pretty clear that spamming journalists and getting some publicity didn’t convert into any pledges.

We probably also launched our publicity efforts too soon, before we had reached $ 1.000. Next time we’ll consider paying this amount in ourselves and considering IndieGoGo’s cut as marketing expenses.

So what do we think were our biggest mistakes and lessons learned? What would we do differently next time?

In hindsight, it’s clear we failed to explain the product to people in the pitch video. Talking to people, the single most frequent first response is “I don’t get it”. Then we take the time to explain it and then they are like “Oh, I see. That’s cool”. We could have made a more detailed demo – especially detailing what we’ve planned for the super-easy editing and the social sharing aspects of it. Making an extensive demo would have taken considerable more time and effort than we already put it, but doing a campaign over again we’d probably start with explaining the product in more detail.

We failed to make an emotional connect with potential users and funders on two levels. On the one hand successfully conveying why we’re doing this, why we believe in this and what will happen if we don’t get funded. On the other we also failed to explain and “sell” the “what’s in it for me” the “how this makes my life better” to the potential backers. Doing it over, we would focus on how the product improves the user’s life like keeping more in touch and more up to date about your life, lives of friends and families, sharing more with others instead of your videos just gathering virtual dust on SD cards and hard disks, Apple-style with people showing real-life use-cases.

Starting out, we targeted our friends, families and fellow entrepreneurs and things looked good for a while. Then as the campaign progressed, growth quickly leveled out as we didn’t manage to identify and branch out to new potential groups of users that would love our product and to other communities who’d be interested in seeing us succeed. Next time, it would probably be smarter to to do some research, tests and cohort analysis to find those groups up front before launching the campaign, having an actual plan on who to market it to, where they are, how to best reach them and how to better enable them to engage with and share the campaign.

In conclusion if we could have invoiced all the work we put in as regular consulting hours with normal customers, we’d probably made more than our original target for the funding campaign. But don’t let that deter you from trying. Just avoid doing the same mistakes we did.

For further reading on lessons learned, make check out Francis’ “Tales of Creation” where other entrepreneurs share their experiences and insights.

Stay tuned for the next installment, in which we perhaps test and learn how to fund an iPhone app – an Instagram for one second videos – with private investors for equity.

Until then, I’d love to know what your experiences with crowd funding are. How did your campaign go? What did you learn? What do you think we did wrong? Share in the comments or join the conversation on Hacker News.

Update: We were approached by a major investor in [insert name of massively successful camera product brand here] after we had decided that the experiment had run its course and shortly before the Vine app hit the street. Of course there is no telling if that conversation could have gone anywhere interesting – or not – had we decided to revive it and press on. However, perhaps the last lesson learned was that these things take more time than you think. To create and manage – but also for your message to reach out to interesting new places. And just as you are about to lose faith and passion, your luck just might turn if you stick to it. However, we had already decided to kill it as we had run out of personal interest and passion. With the release of Vine immediately after, that decision was reconfirmed for us and I don’t think we regret killing it.

We at @getGauss made it to LeWeb 2011 all because of people like YOU helped vote us there! We are very grateful for your support!

Have you been wondering what our bootstrapped startup is all about? Watch our live world premiere from on stage at LeWeb in Paris:

This is what Gauss – The People Magnet is all about:

The amazing pitch coaches to whom we owe our pitching steez – Chris Shipley (@cshipley) and Michelle Messina: 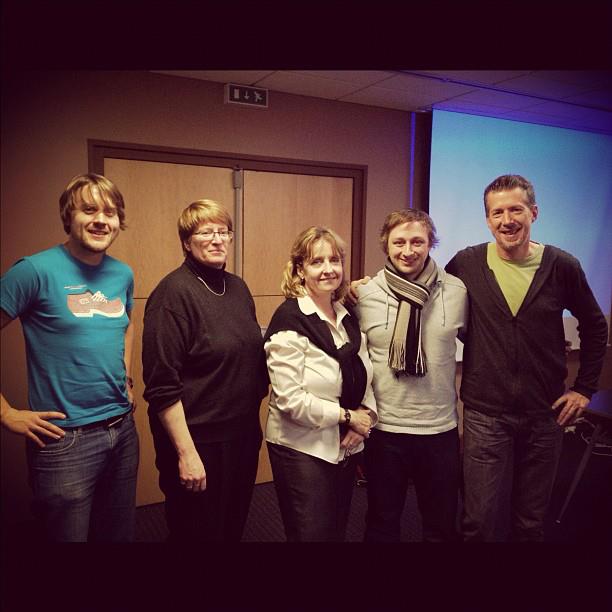 Interviewed by TechCrunch Europe on the LeWeb Radio: 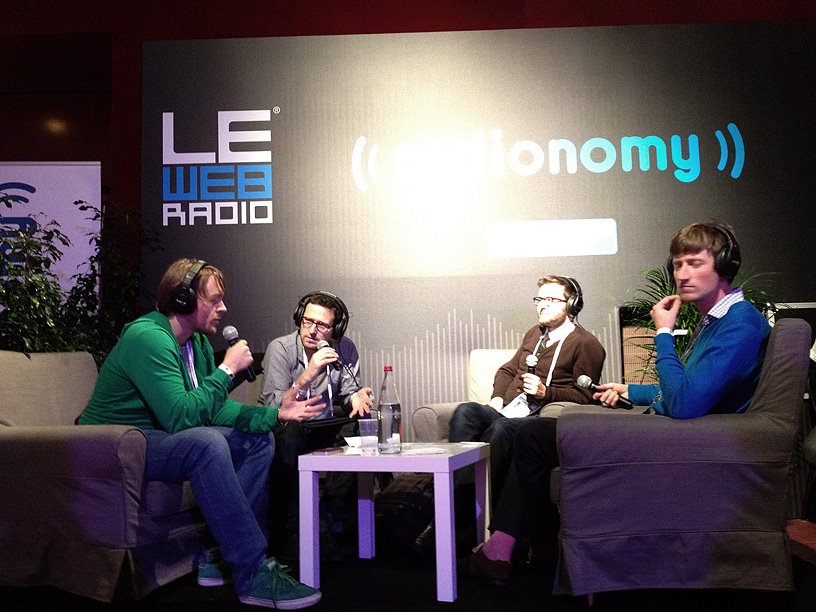 Interviewed by the wonderful Mylène Schwinte (@swantoka) for the Leonardo Davinci Institute: 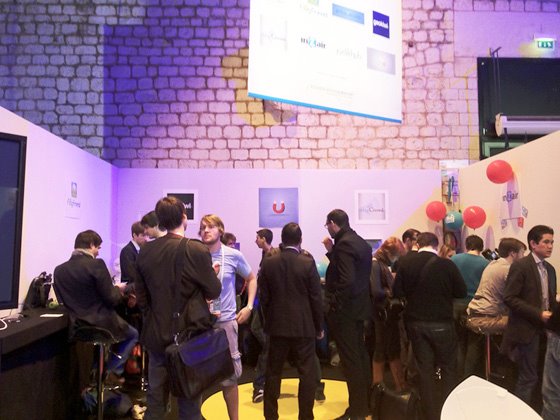 Time to thank our fans personally after voting for us: 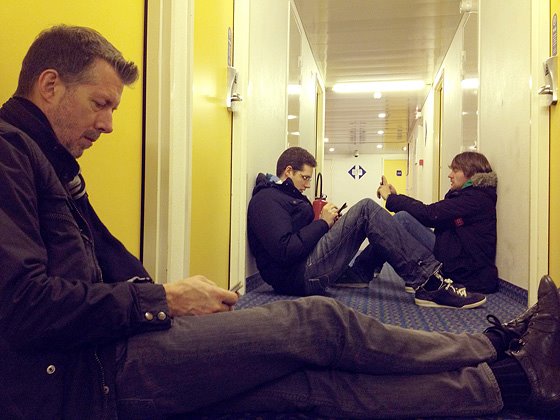 Yesterday Netvibes launched a version of their service for mobile phones available at m.netvibes.com. I’ve been playing around with it using the RIM browser and Opera Mini on a BlackBerry 8700g for a day now and the first impressions are good when using the RIM browser. The site doesn’t seem to work in Opera Mini at all, though. That surprises me. I’d like to know why.

Some widgets like Google Maps and flickr streams don’t work. I can understand that the AJAX laden Google Maps would not work on the RIM browser, but I am at a loss why RSS streams with images won’t show up.

I haven’t registered much noise on the ‘net about the launch yet. The Netvibes blog didn’t mention it [yesterday].

Take it for a test spin on your mobile devices and let me know how you fared!

Update 2:
When trying out the iPhone version of Netvibes I just discovered that there are some access issues. When several people behind our proxy are logged in on Netvibes at the same time, I get the start page of the other person who logged in most recently when accessing iphone.netvibes.com. That is to say I can see all the tabs of this user and all the pages they may have already accessed/loaded in that same session. Is it just me being paranoid or do you also think this is a major security issue? Perhaps we should take a look at some phone security statistics and get real. It’s good to be apprehensive, although technology is a safe way of doing things these days, it needs to be secure from hackers.

Update 3:
The Netvibes development team says in an email that they’ve fixed the proxy security issue and that they knew about it before launch. Nice that they responded that fast, but I find it a bit careless to knowingly launch new services with such issues unresolved.