I recently was asked to help Startupbus out with arranging their local stop in Cologne on their way from Berlin to LeWeb in Paris. And as I couldn’t say no to a free ride to LeWeb, I somehow ended up on the bus as a participant too.

“StartupBus is an annual technological startup competition, described as a Hackathon, created by Elias Bizannes in February 2010. The competition is held across a 3-day bus ride where contestants or “buspreneurs” compete to conceive the best technology startup. The competition seeks to attract young top talents to compete, to search for the most innovative startup conceived by the groups, where the winners are determined by a panel of judges. Starting from February 2011, it has gone through many iterations in various continents from 2011 to 2015, with the first in Austin,Texas and subsequently in North America, Europe and Africa.” – Wikipedia

As I was in the Netherlands holding a talk, I couldn’t be in Berlin for the kick-off, but I skyped a pitch in for my idea, basically a rehash of what I’d previously won with at Startup Weekend Amsterdam. 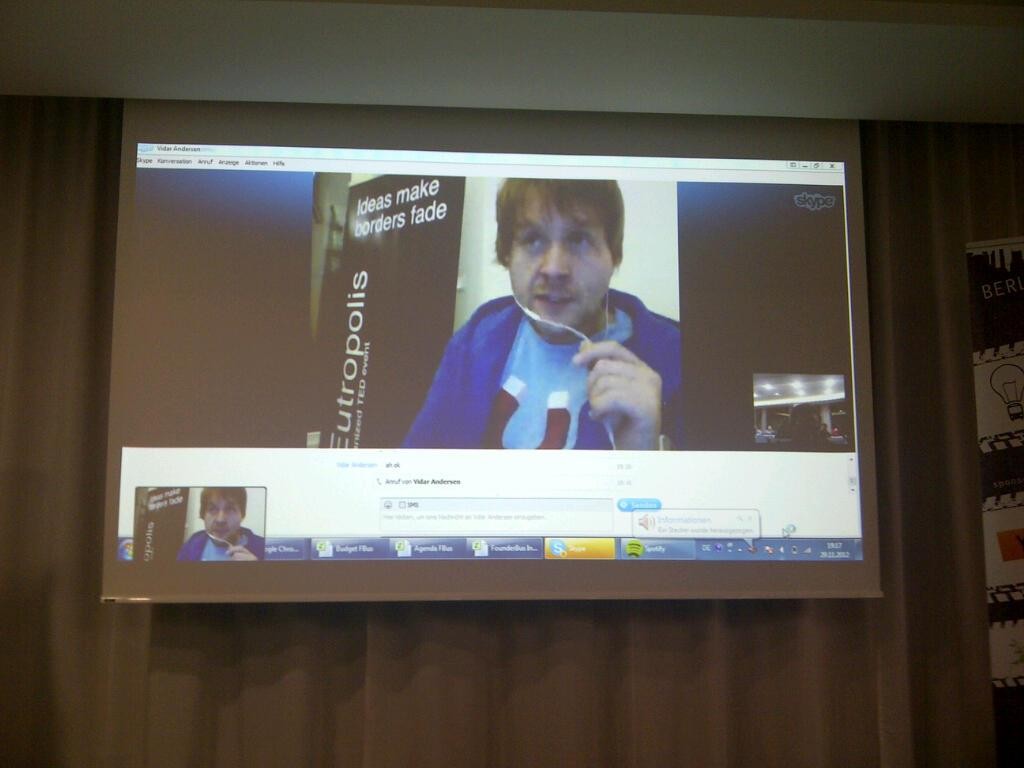 Phoning it in – Literally.

Little did I know that I would have a complete team working on it all the way from Berlin to Cologne by the time I was back in town!

So I ended up pitching it. Interestingly it had changed to coffee dates instead of lunches on the 6 hour drive down from Berlin. 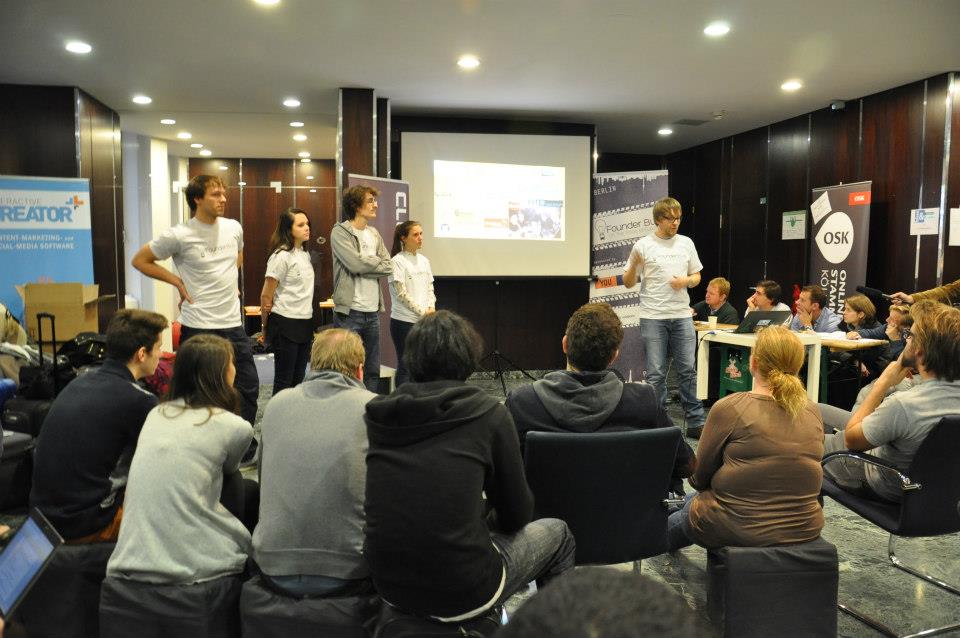 A pitch I royally fucked up because of mistaking a 3 minute format for 5 – Amateur mistake!

Some impressions from the pitching event in Cologne:

And then we packed it all up and set sail for Paris. 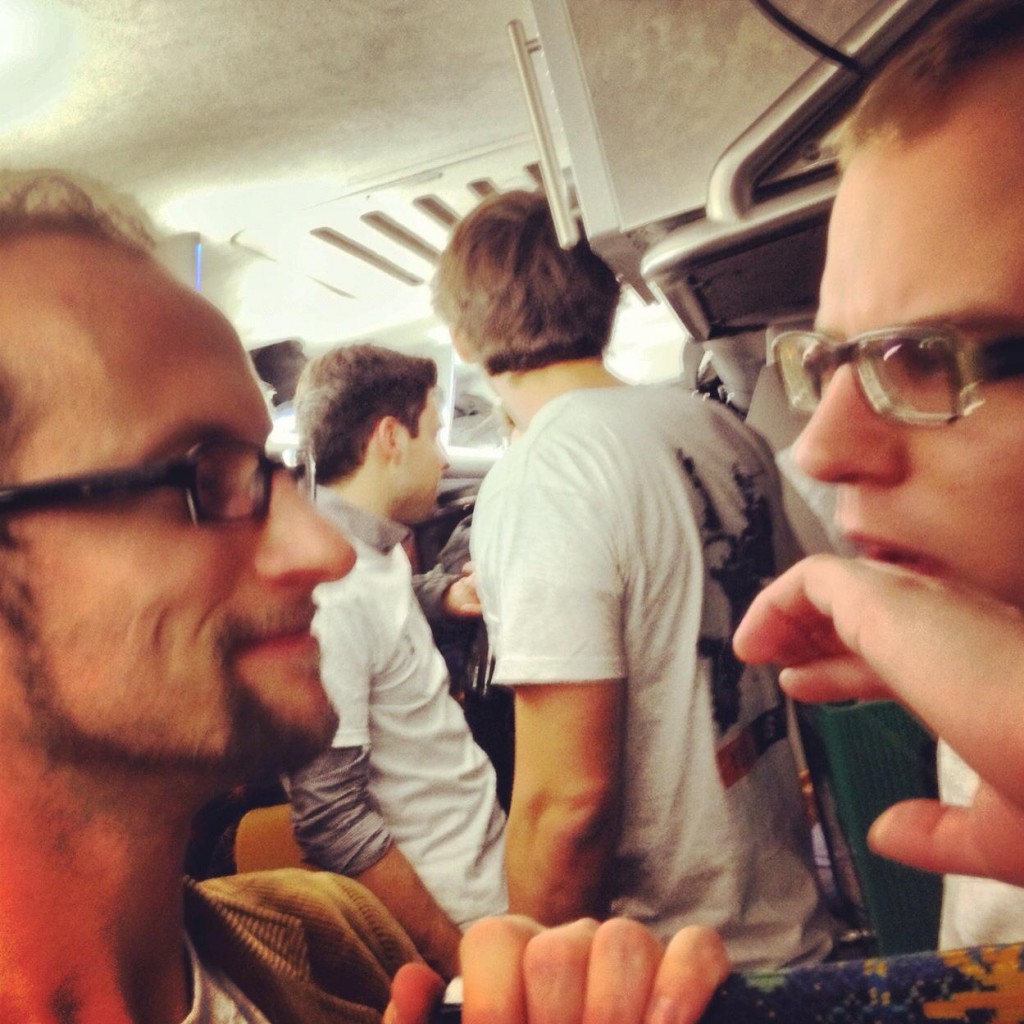 Life on the bus is tight and chaotic 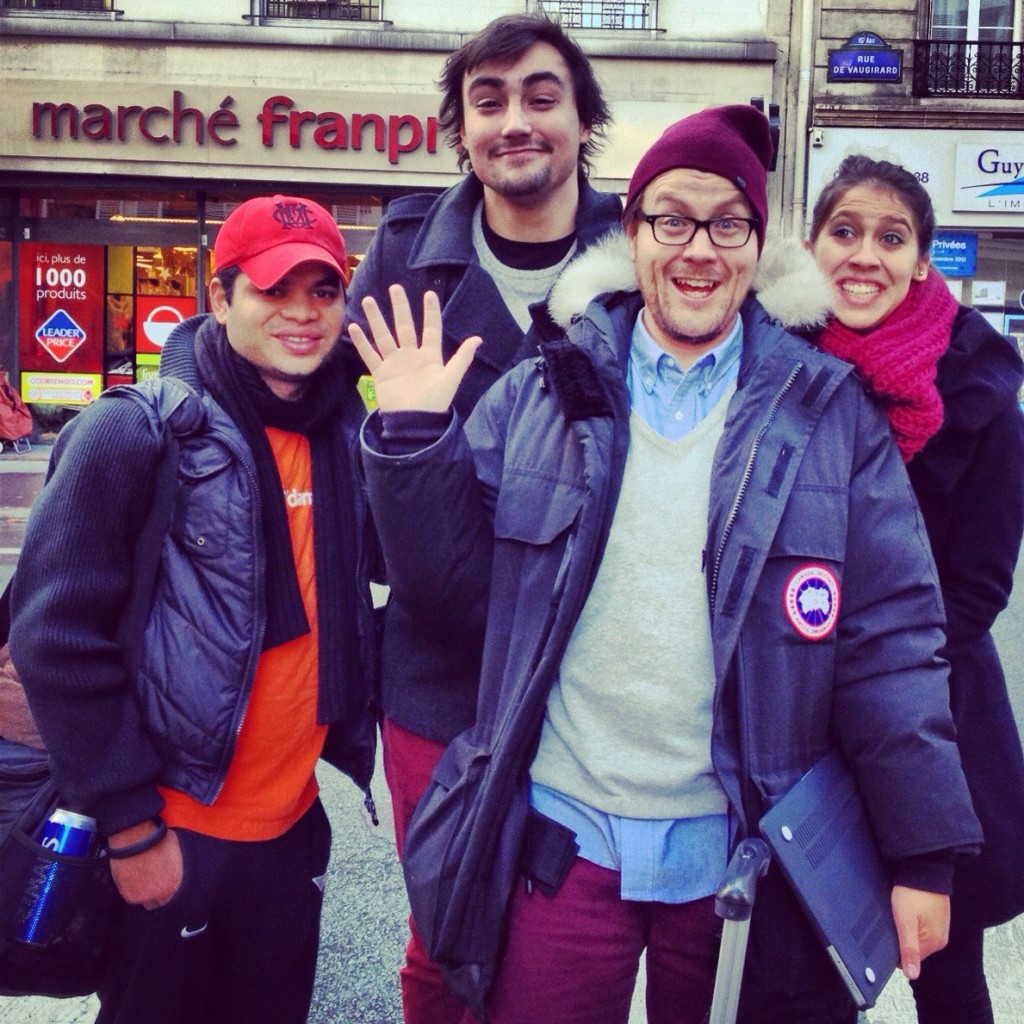 Hi ma, this smurf made it to Paris

In paris, all the European busses met up and pitched against each other – There could be only one! 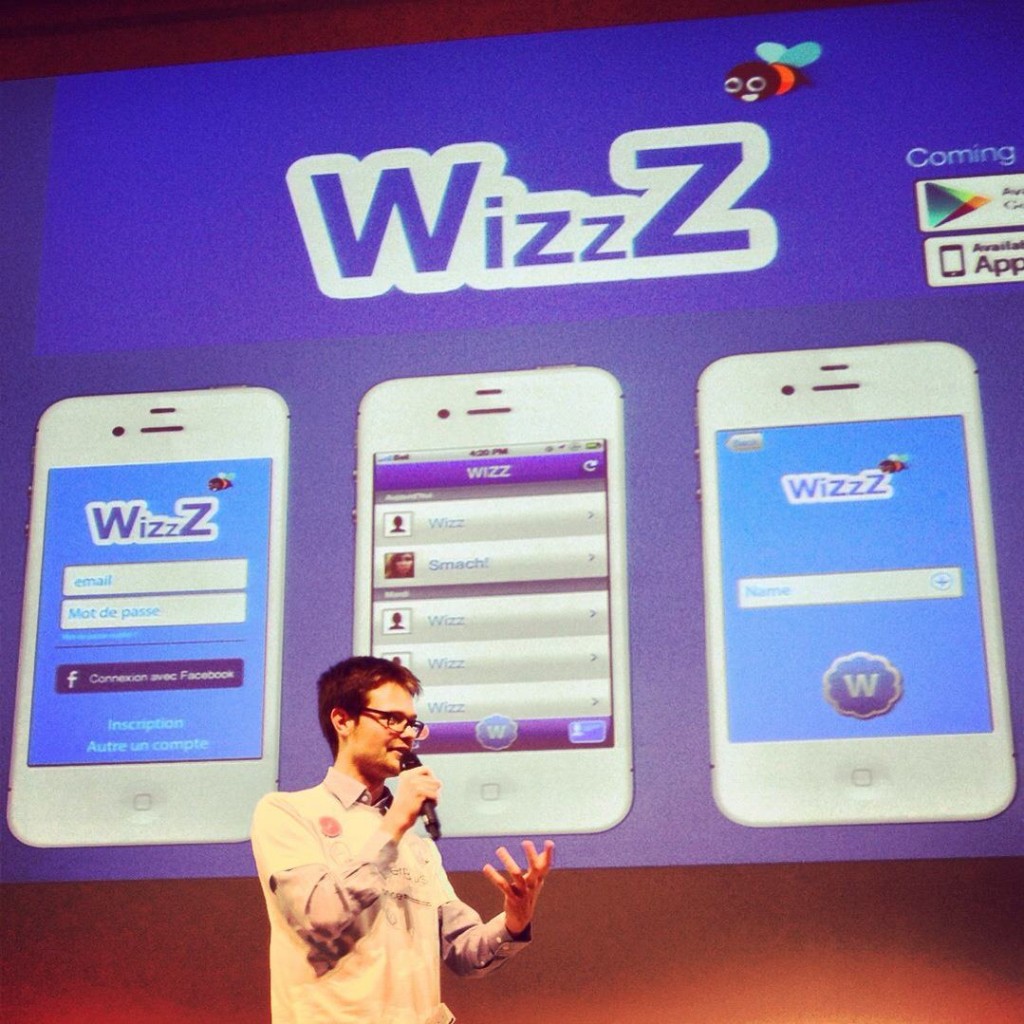 So at the Microsoft HQ in France, a winner had to be selected by a team of distinguished international startup people like Om Malik. 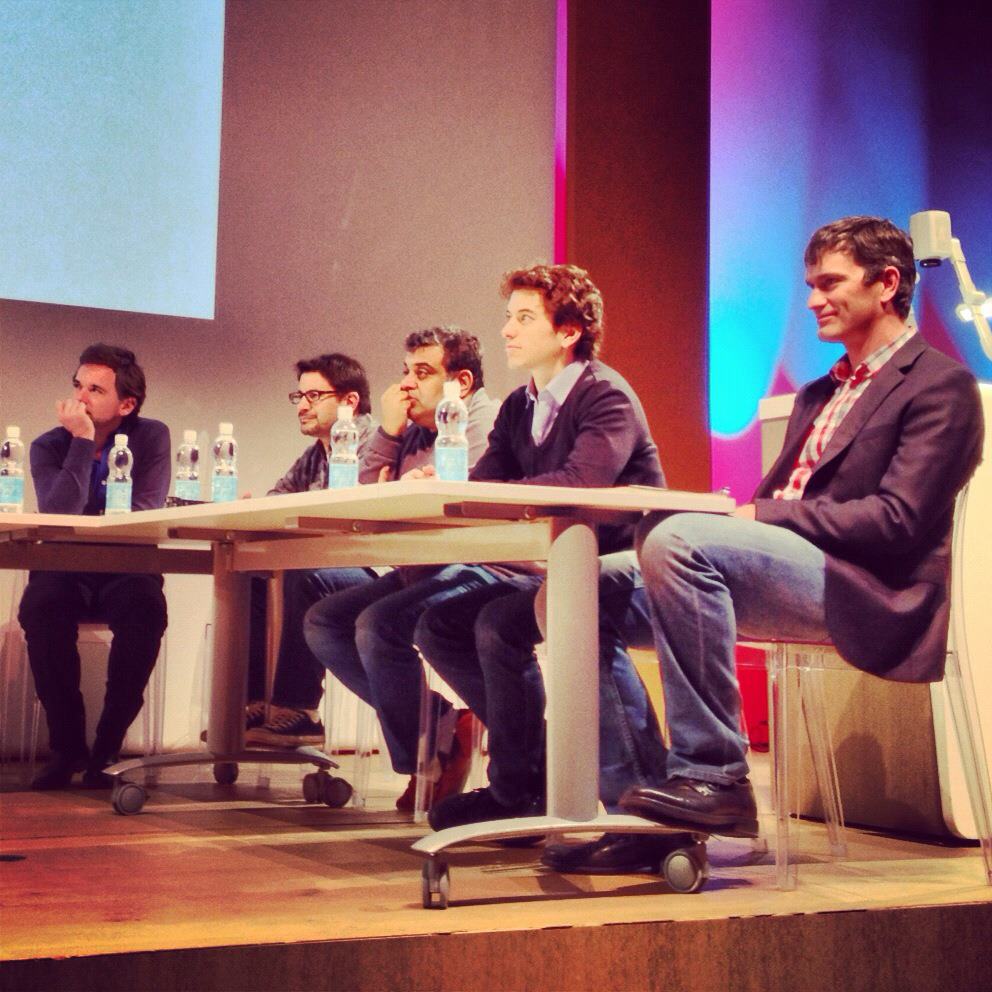 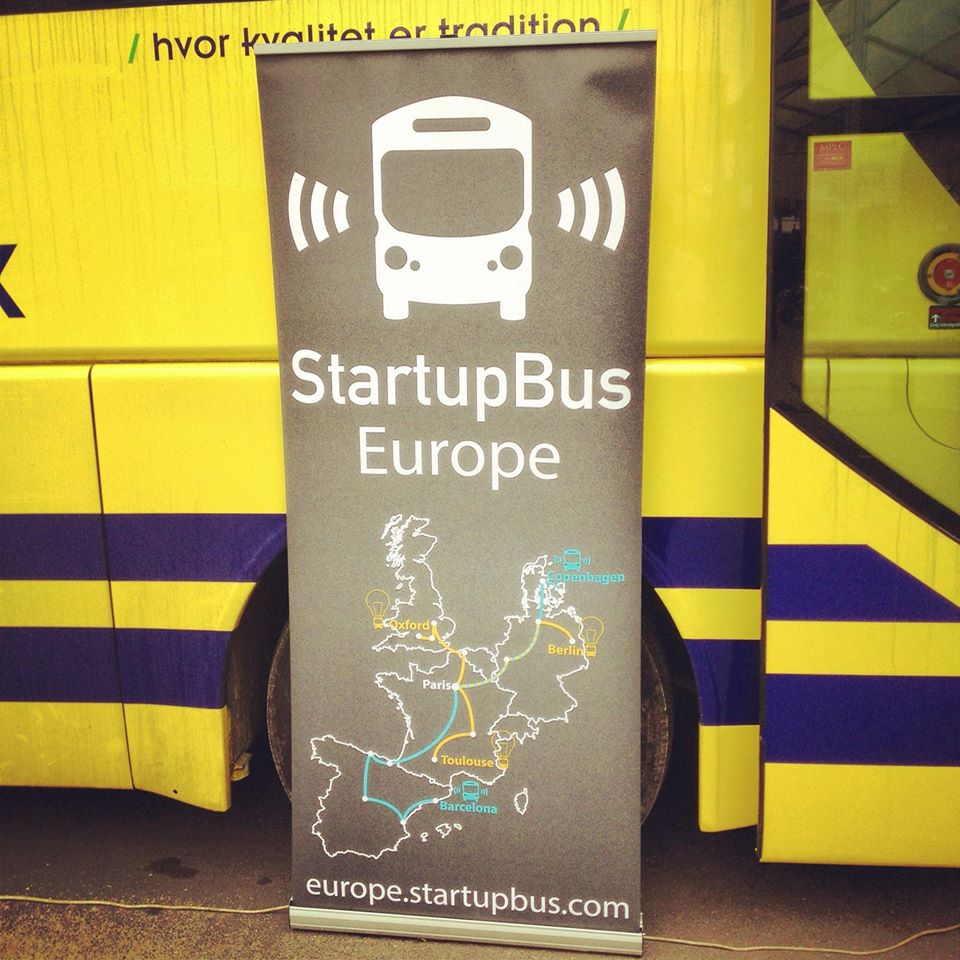 The Startup Bus camped on the LeWeb venue, Paris

Now, as I didn’t have a ticket for LeWeb and the only person to get one from Startupbus was the winner, my next challenge was to get myself a ticket. For free, because I have never paid for a startup event ticket in my life and wasn’t about to start.

It took a while, but after the first day I had my success. 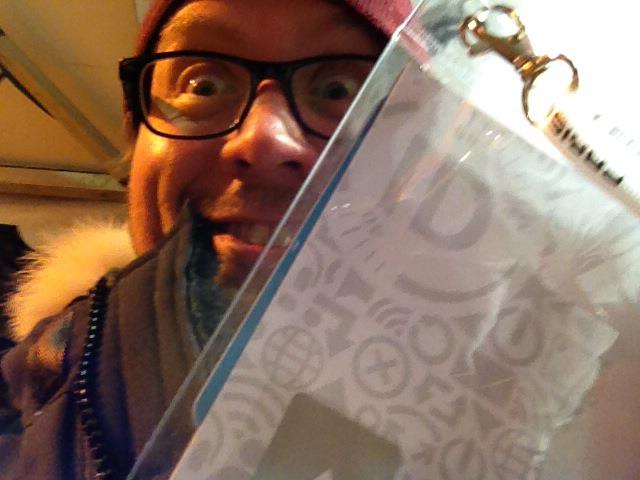 Little known fact: If you dress properly (it’s cold in Paris in December) you can just show up at the LeWeb event area and hang out OUTSIDE, pretending to attend (the venue “Les Docks de Paris” is actually three buildings and everybody has to move between them by going outside in an area you don’t need a badge for – as I had learned being invited in 2011 to pitch my startup getGauss.com), chatting up old and new friends – casually asking for a free badge, you know “for a friend”. You won’t believe the amount of companies who have unused badges available or people who only came for one day, etc.

But YOU HAVE TO DARE TO ASK! AGAIN AND AGAIN! And thus – I had my free badge after a day of hustling.

And don’t worry if the picture looks like someone else’s. If security asks, just snap “Of course that’s me – don’t you know who I am!”, yank the badge back, act with faux indignation and march on in. I know I did.

And if you don’t want beef with guards ever again, just find an entry point with a more accommodating guard, chat them up, build a sympathetic relationship, ask about their life – be remarkable and be remembered. They’ll let you pass as many times you like without checking your badge ever again.

And another trick that works is to share badges. Like timesharing, but for event badges. Just make a deal with someone who needs to leave early or arrives late. Whatever. Even if it’s just for some hours – it’s amazing how many people you can meet and greet (and pitch) if you have prepared your hit list properly and know who and where to find. Don’t forget to ask for what you can give in return, though.

Yet another trick that we used with the getGauss.com team was to slip badges out the back door and have more team mates enter on the same ticket – They usually only check you on the way in, not the way out.

Now, at conferences like LeWeb the most interesting conversations and new friends making happens at the parties. And you usually have to have an invite. But here’s the secret: Just show up without one. It’s not so hard to get one as one may think. After about an hour of hustling contacts and abusing social media, I was magically added to the guest list. Not one, but three times. My favorite was as personal guest of Badoo founder Andrey Andreev. #lulz 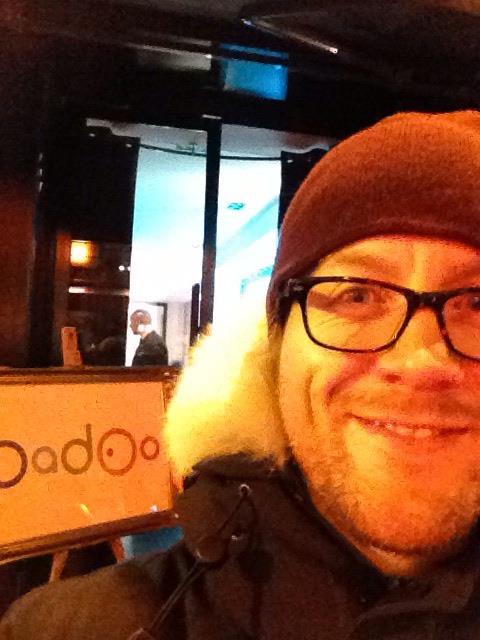 Hustling for a party invite outside the LeWeb Badoo party venue

The final Startupbus Europe winner (AND from the German Bus!) presenting at LeWeb, introduced by my friend Chris Shipley: