I used to believe things. Not that there was a Santa Claus able to travel faster than light, a fairy that ate teeth and shat coins or that there is a life after death (there’s a reason why it’s called DEATH, don’t you think?). No. Until a couple of years ago I believed, or more like took it for granted, that everybody sees numbers in their mind as coloured numerals. What? You don’t? Let me try to explain how this looks to me.

Every number from 0 to 9 has it’s own colour or shade of gray. I’ve illustrated roughly what they look like below:

Now as you see, it’s a bit complicated with the shades of gray. Hey! I didn’t invent this – it was just sort of always there. To make matters worse, when numbers stand together to form yet another number, as they often do – the clever bastards, the colours at the end of the number seems to outshine the others. I’ve tried to illustrate this with some of my favorite years in colored numbers: 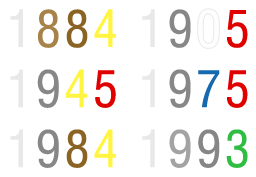 I only see this in my mind when thinking about numbers, not when reading numbers, mind (no pun intended) you. I have more strange things going on in my mind, but I’ll keep that for future posts.

Do you see colours? Do you have some interesting visualisations in your mind? Am I crazy? I’m looking forward to be reading your stories!