Have you tried out TweetMag yet? It’s an exiting new iPad app that will let you comfortably read an aggregate of your @twitter feeds. The app is not totally unlike Flipboard, but it’s currently and it let’s you consume the content in a more flexible and enjoyable way in my personal opinion. However, the way TweetMag (as of writing) facilitates twitter list management sucks. I’ll suggest a quick and dirty fix to that below, but first, take a look at the sweet TweetMag app in their promo video:

The problem with lists in TweetMag

Right now, the process of adding and managing twitter lists in TweetMag can be a very painful chore especially if you are following many lists from one single user. You have to add each list separately, one at a time, by dragging the icon of a list from the menu bottom right to the top menue bar or rack (up to “TOP STORIES” and “CATEGORIES”). As that was not bad enough, you need to drill your way down the interface to find the same user again and open her lists again for adding the next list. And again. And again. And again. Ouch! And as if that wasn’t enough, you can’t even see which lists you have already added! That’s just silly and poor design if you ask me. Click on the image below to see a screenshot of the current TweetMag app on the iPad in its original size: 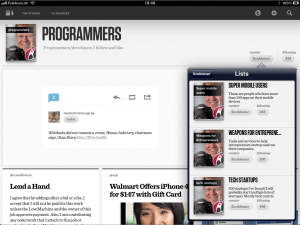 It doesn’t have to be this painful. I’ve made a very quick and dirty improvement suggestion illustrated below, adding a simple visual cue and an extra button.

The user should visually be reminded of the lists she’s already added by labeling and/or fading out (ghosting) the already added twitter list’s icon (illustrated). It is not possible to spot which lists the user has already added in the current version of TweetMag, potentially leading to a lot of unnecessary back-and-forth operations to verify if a list has already been added or not.

Currently, to add another list from the same twitter user, the user is forced by the software app to step out of context, remembering (internalising) the previous steps and repeat a multiple step process to get back into the context of continuing to add twitter lists from the same user.

That’s just not nice to the user in my book. I think the software should play by your processes and let you stay in your context. By adding an add/remove list button directly in the list overview, the user would be able to add, remove, manage all list operations in one process without having to leave context or having to remember previous steps and keeping the original goal in mind while working herself back into context repetitively per list management operation.

Adding colour to the add/remove buttons like green and red could further enhance affordance.

Should you be worried that any spatial navigational cue of having the user dragging the icon to the TweetMag rack might be lost for each add/remove operation using simple button operations instead of drag & drop, I suggest looking at how Apple OSX is doing this; You could animate the icons flying up on the rack, flying down out of the rack respectively to retain the visual cues. Take a look at the image below for a quick and dirty mockup of my suggested changes: I also added the suggestion on Get Satisfaction should you be interested in my suggestion to improving list management in the TweetMag app.

What do you think of TweetMag? Do you love it? Hate it? Perhaps you prefer Flipboard? Do you create and manage twitter lists with TweetMag?