Some of you may remember Headplay, a wearable display – only a concept and a pitch for VC at the time. After what seems like ages (well, maybe more like six months), I finally got an email from Headplay last night announcing that they are now ready to ship. It’s allegedly available for shipping at USD 499.99. 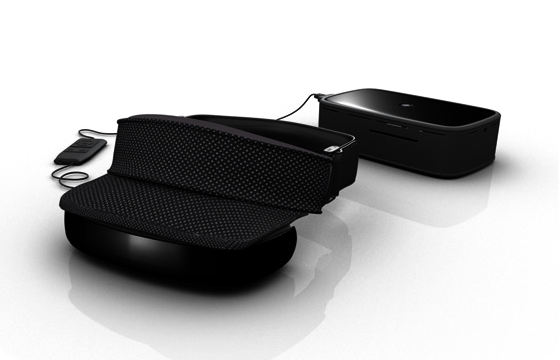 I had almost forgotten about the concept designed by ideo and written it off as yet another vapourware product. At the time I learned about Headplay, icuity was building up hype for their wearable iPod display. There was also MyVu.

Headplay, as opposed to icuity and MyVu, sports an own media player – a separate box – that can reportedly play most familiar audio and video formats. Furthermore, where as the two other brands supports resolutions of 640 X 480 and 320 X 240 respectively, Headplay touts a native 800 x 600. However, there is no VGA or DVI port, only an y/c (svhs). There’s a page up on the site detailing the specs further.

Let me know how it works for you if you ever get your hands on one – or better yet, send me one to test!

Another new affordable wearable display to check out would be the icuity VR920 which includes stereo vision (Nvidia only) and head tracking. I have no information on how well it works at this time.

I’ve been looking for an affordable wearable display to use with a laptop for a couple of years now. A display I would actually buy would have to have at least 800 x 600 native resolution and a DVI or VGA interface. Optional niceties would be head tracking and stereo (twin) cameras. The threshold for me actually considering a purchase would probably be between USD 500 to 800, depending on specs.

Be sure to leave a comment if you know of other affordable and interesting wearable displays, or maybe you have some ideas for use that you would like to share? I would like to experiment with augmented reality myself. Virtual Light anyone?