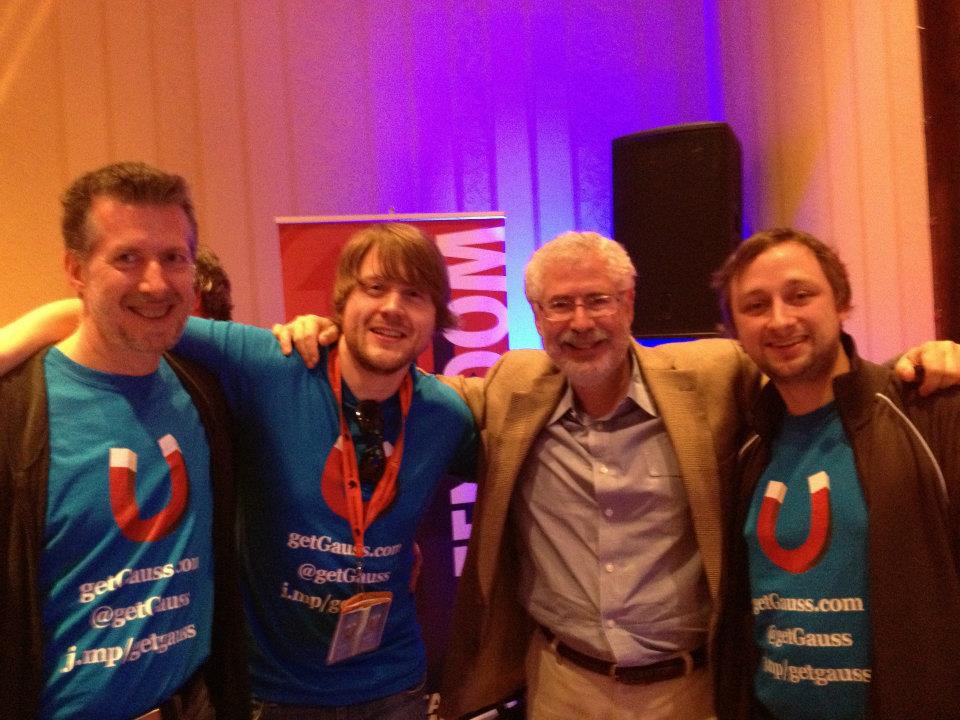 This morning, I accidentally stumbled on an internal memo from me to my co-founders and advisors from my last all-in startup venture, getGauss.com, from almost exactly four years ago.

“Gauss – The People Magnet” was one of the very first social discovery apps for the iPhone. For the more technical inclined, it was also a freaky cool cloud backend to mine people’s interests and networks to combine new insights with proximity and context. It took us through a roller coaster ride, from the front pages of The New York Times, CNN and TechCrunch to almost personal bankruptcy in the course of about two and a half years.

In the name of radical transparency, I thought I’d share it without comment with the public. I’ll let it be a testament – for good or for worse – of my startup CEO communications skills. I’ll let you be the judge. Anyways, it’s an interesting time capsule from a startup in the midst of the exploratory phase. At this point, we were three months in and already had an MVP and  constantly experimenting with new features and learning what users were doing and wanted to be doing and all the while trying to keep up with Facebook, Twitter, Google and Foursquare API changes that where rampant back then.

After a late evening discussion with Kit and Arne in Rotterdam on Friday about the magnets and the interest to magnetize them with. The objection from Kit that the magnets wouldn’t be doing anything (except matching Gauss users with other Gauss users, which isn’t likely in early stages) kept haunting me to the point where I started to rethink about the concept of the magnets (at least for the prototype, which should serve as a proof of concept and a learning vehicle, not “The Product”). The last days input from Christoph about semantics and taxonomies also helped me realize that we should probably be attacking the whole issue from another angle completely.

Here’s what I think that what we should be focusing on: Providing people with perceived value and perceived relevance in the form of helping people discover, approach, meet and connect with new and relevant (to them – not necessarily to us or in a quantifiable way other than user satisfaction) people around them in real time. To help enhance situational awareness, help make use of (potentially lonely) idle time, influence fortuitous instead of random encounters and support safe and fun (shameless) ways of approaching and connecting with new people in meaningful ways; To promote real life human to human interaction. To facilitate connectedness. To support human happiness. To become a de facto realtime proximity based discovery and recommendation engine for people. That’s what I think is the bigger picture and our main objective

Do I think we need a factor or factors other than the Gauss app itself to recommend and discover relevant people with? Definitely! Do I think that we need to provide value to Gauss users without having to rely on reaching critical mass to enable that, that is to say do I think we should enable Gauss users to discover and approach non-Gauss users from day one? Absolutely!

Do I think we should implement that for a minimal viable product or a prototype, hell no. Those are not the kind of features I would consider critical for the discovery and validation phases. In fact, they would require too much time and effort that we don’t have to spare at this moment. Features that help discovery and recommendation based on user input are awesome value adds, albeit once we have found a basic product/market fit; a leg to stand on in the market.

Now, do I think we need a taxonomy as (or a part of) that factor to facilitate discovery and recommendation? Perhaps. Do I think that we should create, maintain, curate and support an interest taxonomy? Absolutely not. It is my realization now that entertaining any such idea (at least for discovery and validation) would be criminally insane (yes, I’m guilty of not thinking straight). The reasons as I see them are twofold; a) Having an own taxonomy is not core to our main objective b) We do not have the resources and time for that. As a conclusion, I think it would be slow and painful suicide. As an aside, we already know about having an own taxonomy and can always go back to test how that works, should everything else fail.

Do I think that any taxonomy should be hierarchical? Definitely not. Only, and only, as an option among other more powerful and proven ways for the user to approach her choice – if at all.

I think it would make the most sense to us to utilize the most attractive player for an external factor based on a couple of basic criteria: a)Uptake/market penetration b)Feature set c)Calories/how easy it is for us to implement d)Would it be a relationship with benefits e)Staying-power. I think that, at the time being, “interests” are the most attractive factor to help facilitate discovery and recommendation of people; to help us on the way to achieve the main objective. As a side note, I think network topologies are just as attractive, but I think we do not have any way of getting to that kind of data from day one, and I would thus suggest postponing cruising down that avenue to a later day.

I think what we should be concerned about is capturing intent. That is to say, not only what interests any given user has expressed but also together with an intent, or an indication of what the user intends with that interest. It could be that we could (or should, even) be the ones maintaining the taxonomy of intentions, but that would be a substantially easier task than maintaining an interest taxonomy/graph.

It is my opinion that Facebook offers a starting point for us to get going and I base that on the following answers to the above criteria:

a) 800+ million users around the world

d) If we play it right, it puts us in an interesting spot: Helpful to Facebook, using a powerful platform with insane potential for reach, leveraging existing power players make potential investors more at ease than unknowns or own, etc.

e) Should be around for a couple of more years

Further more, we also already discussed and concluded that Facebook would most probably be accepted as a “forced” login at the first Rotterdam sprint. Other startups “forcing” users to authenticate with Facebook, like turntable.fm saw exponential growth in user uptake afterwards. I, however, do not see it as “forcing” the user to use Facebook. I see it as convenience for the user, not forcing them to sign up with yet another service, but have a large well known and established player handle the sign-up and account management using an established and convenient procedure.

I am well aware that using Facebook for the interest graph could be considered a compromise towards freedom of choice and user privacy, but I don’t see it as such. I see it as a first step in the right direction. Standing on the shoulders of the giant will help kickstart our discovering, learning and testing at a rate and at a scale than we would otherwise ever be able to at this stage. Does this mean I think we should be a Facebook-only service forever? Absolutely not. I think we should keep our eyes open, watching the other players as Google+ and Apple and seriously consider implementing whatever makes sense for a) enabling more users b) generating more value for existing users c) leveraging any strategical and/or political advantages. But first, we need to have discovered and validated something that is a basic product/market fit. It makes as little or less sense to me to pursue and develop for different social and interest graphs simultaneously as pursuing several different mobile platforms at the same time. I think that would make for a classic case of “premature scaling”.

To sum it up, I think we should proceed with the following steps for the discovery and validation phases:

2. Push the limits of what’s possible with Facebook, poke the box, stir the nest, push it for all it’s got

4. Discover basic product/market fit (which is a fancy way of saying “we discovered something that the users find valuable in our product and would even pay for”)

5. Validate product/market fit (This is also where it could be necessary have funds)

6. Scale (This is, if we were able to validate, where we revisit and consider other social and interest graphs, other predictive possibilities, etc. This is also the phase where closed funding is probably a must.)

The only thing I could see forcing us to revisit and reconsider this sequence would be if Google+ or Apple releases a new social and interest graph during our discovery and validation phases.

I think the key decision to be made is, provided what Facebook delivers what we need, if we are comfortable with going forwards using only Facebook, implementing twitter and foursquare for accessing, recording data and their social graphs notwithstanding, for the interest graph. It makes a lot of sense to me and I can live with the compromise. What say you?

Mind you, there are some unwanted outcomes we probably should keep in mind. I have listed a few that are on my mind:

3. Ending up with a solution that we have to do just as much work as if we had our own taxonomy

5. Failing our due diligence of Facebook’s a) APIs b) license policies so that it will come back and bite us in the ass in the near or far future

Are there other unwanted outcomes we should watch out for?

As I see it, the potential constraints and other major considerations to all of the above are hinging on the following basic assumptions:

Assumption 2: We can access the interests of any given user (or if only some, by which criteria?), on the behalf of a Gauss user that has authorized with Facebook – or in any other way

Assumption 4: We can add an interest to the user on Facebook from Gauss on her behalf using (a) Facebook API

These assumptions needs to be tested.

As to what the user experience and implementation could look like, stay tuned for part two on the topic.

Now talk to me, guys!